Why Moms Were the Real Winners at the NFL Draft 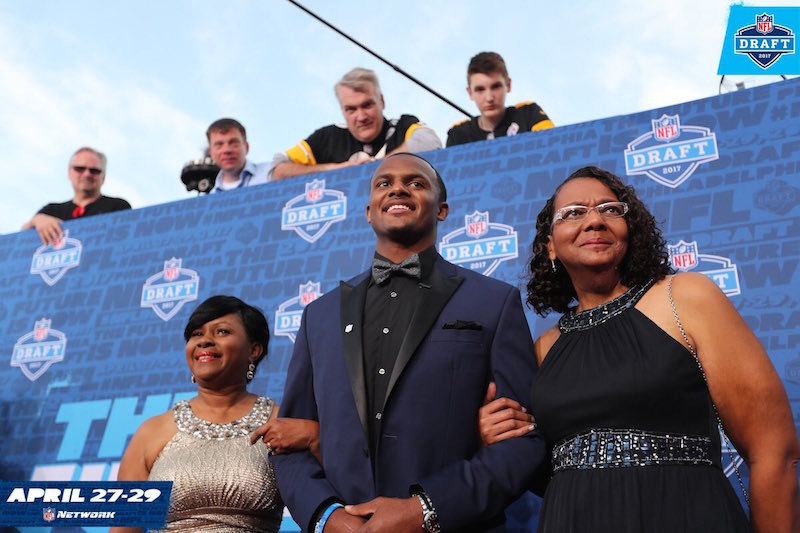 The 2017 NFL Draft is officially over and despite the life-changing picks and the million dollar deals, it’s moms that walked away as the real winners. After all, long before striking gold in the big leagues, it was moms that were nursing the injuries and shuttling their kids to practices, so it makes sense that they stole the show.

Parenting a young athlete can sometimes feel like a full-time job on top of the usual parental responsibilities. Besides being a chauffeur and nurse, there is also the constant worry and heartache when injuries happen, and losses hit hard. A few young men did not let that dedication go unnoticed and put the spotlight on the amazing women that helped get them to the NFL Draft. The video below shows Clemson quarterback, Deshaun Watson, who was picked 12th overall by the Houston Texans, reading a letter written by his mom just after his selection was announced. It moved him to tears and is guaranteed to do the same to you.

Incredible moment.@DeshaunWatson4 is brought to tears as he reads a letter from his mom. #NFLDraft pic.twitter.com/8Z0QMTfuxT

Watson wasn’t the only player to use the special night to highlight a special woman that raised him. Takkarist McKinley, a defensive end from UCLA, spent his acceptance speech praising his grandmother. He had promised her just seconds before she passed away in 2011 that he would make it to the draft. “I made a promise to her and I stuck to it. I made that promise, man,” McKinley told the NFL Network, “I told her, before she passed away, I was going to live my dream. I was gonna go [to a Division I college]. I was gonna get out of Richmond, I was gonna get out of Oakland. I was gonna go to the NFL. I made that promise to her, man. Thirty seconds later, she passed away. And this is who I do it for. This is who I do it for, man.”

Are you a sports mom? Share some of the challenges you’ve faced raising a young athlete.