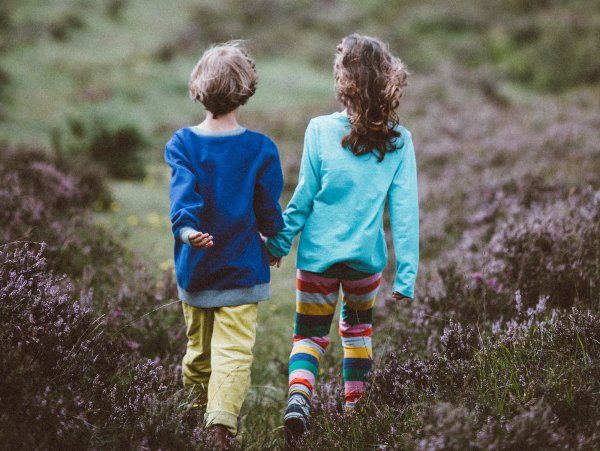 I remember the day like it was yesterday. We woke up in Monument Valley, Utah and pulled open the hotel curtains. There in front of us stretched megalith sandstone buttes as far as the eye could see. It was a scene straight out of John Wayne western and as we stepped onto the balcony, it didn’t even seem real. It felt like I was an actress in some silent film from a bygone era, walking in front of a mirage.

I turned to your papa and said, “This is the most beautiful thing my eyes have ever seen.” Then, it started to snow and as the flurry danced around us I cried from the sheer gorgeousness of it all.

A few years later, I was flipping through a guidebook filled with top things to do all over the world. We were still childless, save your furry older brother Pablo. We both worked full-time and had enough funds squirreled away that we felt comfortable taking off on a weeklong road trip all the way on the other side of the country.

So we packed up and flew west once again, this time to New Mexico. The guide highlighted major hot air balloon festivals and the Albuquerque Hot Air Balloon Fiesta was one of the top ones in the country.

We sat in the cold car eating cold hotel breakfast at 5:00 in the morning. The line to get into the festival took two hours to get through and once we were there, it was still a few hours until the sunrise ascension. When it finally happened, hundreds of larger-than-life balloons rose in the sky alongside the sun and I turned to your papa again and whispered that same phrase and it was true. It was the most beautiful thing my eyes had ever seen.

That was in 2012, two whole years before you joined us and three before your brother came shortly thereafter. Truth be told, we haven’t traveled anywhere near that fascinating since. Sure, we’ve gone to the beach a handful of times but anything that involves washing sand out of a tiny bathing suit can’t really be classified as a vacation.

That’s perfectly fine, though. I might not be looking at breathtaking vistas anymore, but I’ve got something much sweeter and infinitely more beautiful. It sounds like your bedroom door squeaking open at seven in the morning, followed by the shuffle and pitter-patter of your tiny feet on the steps. It sounds like your brother calling out for his crib, my name the first thing out of his mouth before he asks to see his favorite cartoon.

It smells like fresh-baked chocolate chip cookies with you both sitting on the window sill, measuring the ingredients just a little too high then spilling some on the counter so it all evens out.

Other times, it smells like hot popcorn on family movie night or that worn out bottle of baby shampoo I can’t bear to part with. It looks like you finding that one square of sunlight on the hardwoods and pulling me over to dance on it or your brother chasing me with a mid-afternoon popsicle yelling, “Cheers!”

I have big plans to take you guys out west someday. I want to show you those exact same places I’ve been and see your reaction to such splendor. I’m waiting until you’re a little bit older so you’ll be able to remember those journeys we took together and lock them tightly inside your heart.

In the meantime, this journey of learning and loving together is more than enough and every day it’s a joy to begin it anew. Turns out, I was wrong all those years ago. You guys are the most beautiful thing my eyes have ever seen and you’re one sight that will never lose its magic.
Featured Photo Courtesy: Annie Spratt via Unsplash

Hi, y'all! I'm Courtney. I'm a mama of two, married to my high-school sweetheart and making a life in the little town I grew up in. I'm a writer by trade, but a mama by heart. I love chocolate and I love family. Let's navigate this crazy, messy, blessed journey together!
Red Tricycle > Spoke Contributor Network > Why My Kids Will Always Be the Most Beautiful Thing in My World