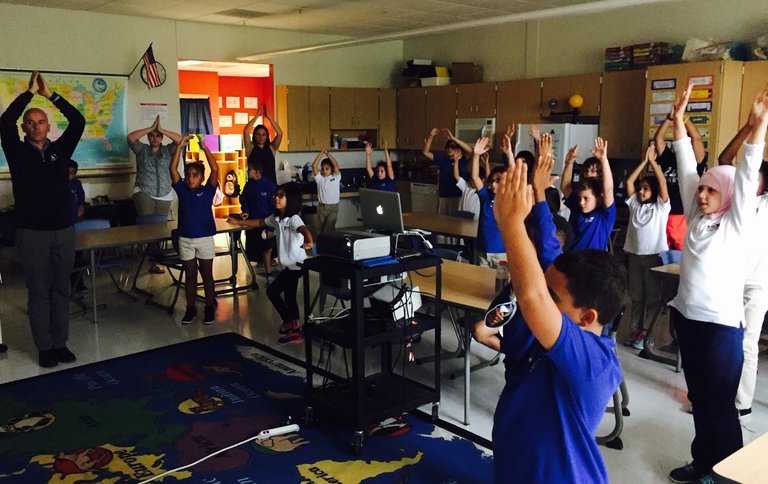 Schools across the country are starting to take a new approach to learning that revolves around getting kids up and moving. Instead of asking squirmy tots to settle down, classrooms are becoming a place to exercise and dance the wiggles away.

Study after study confirms the positive impact of physical activity on kids’ abilities to learn and succeed academically. As James F. Sallis, a professor of family medicine and public health at the University of California, San Diego, recently explained to the New York Times, “Activity stimulates more blood vessels in the brain to support more brain cells. And there is evidence that active kids do better on standardized tests and pay attention more in school.”

With so few states across the country requiring recess, educators have gotten creative with ways to give kids some time to get active in the classroom. The National Association of Physical Literacy has created a program called BrainErgizers that provides a series of 3-5 minute mini workout videos that teachers can use for a quick break during class time. “Kids aren’t meant to sit still all day and take in information,” said Steve Boyle, one of the co-founders of the National Association of Physical Literacy, “Adults aren’t wired that way either.”

A similar program called GoNoodle, that utilizes everything from quiet yoga to fast-paced dance music and plenty of silly fun, is being used in 60,000 elementary schools in the US. “We call this the Movement movement,” Scott McQuigg, co-founder of GoNoodle told the New York Times. “If we invest three to five minutes for our kids to move in the classroom, we are actually going to optimize the next 45 minutes for learning. That small investment in time has such a big yield for teachers.”

Do you think kids need more physical activity in school? Share your thoughts in the comments.